2019 marks a milestone in the history of The Bboy Federation.  The FED began on September 26, 2009 with the creation of “The League”.  This four month long series of events was created to help bring more dancers into the scene and breathe life back into a once vibrant community.  Surprisingly, it worked and started us down a ten year path of growth and discovery.  The league would continue on for 5 seasons, bringing with it some classic battles, workshops and exhibitions.  Most importantly, The League gave dancers a reason to practice and allowed a whole new generation of dancers to leave their mark on SLC.  As the scene began to grow we found ourselves being asked to perform more and more, both in schools and at public events like The Utah Arts Festival. These opportunities to be involved in the community ultimately led us to seek 501c3 non-profit status in 2012.

As a non-profit, The Bboy Federation has been able to create high quality arts and dance programs for youth and adults all over the state of Utah.  In addition to events, we’ve developed after school programs in partnership with Promise South Salt Lake (2013), a stage production called They Reminisce (2014) and a full time facility called The HERC (2016).  Our goal has been to provide cradle to grave opportunities for youth interested in Hip Hop arts.  As we enter into our 10th year we’ve decided to take another big step, changing our name.  But why?!

As The Bboy Federation has grown, so has the variety of programming we offer.  As of 2019 we teach DJ’ing and art as well as dance classes.  They Reminisce includes all four core elements and the 1520 art show highlights local artists.  In addition, our community programs teach the history and context of Hip Hop culture.  In short we represent more than just the dance aspect of Hip Hop and we wanted a name that better reflected that.  So why 1520?

1520 Sedgwick Ave. in the Bronx, NY is one of the most iconic landmarks in Hip Hop’s history.  On August 11, 1973 DJ Kook Herc debuted his merry-go-round technique at a “Back To School Jam” in the rec room of the building.  This event is widely considered to be the jump off point for the entire culture.  From here the evolution of the DJ, MC and BBoy grew exponentially.  By the end of the 1970’s these three elements combined with Graffiti became the foundation of the culture we call Hip Hop culture today.  To us 1520 Sedgwick represents the limitless potential of Hip Hop.  When we think of 1520 we think of the culture as a whole, rather than its individual elements.  It’s a space that allowed for the growth and development of something unique and unexpected.  This idea is a core philosophy of ours and is why we chose to rename our selves 1520 Arts.  Our goal is to respect and represent the heritage of Hip Hop while continuing to push forward and create something new.

We want to thank you for all the support over the last decade!  We love what we do and we love our community.  We are excited to see what the next 10 years bring us and we hope you’ll be there with us.  Just like the youth we serve we are constantly growing and are always in need of support.  For those who aren’t able to participate in programming there is always the option of becoming a regular donor.  For every $10 you give you provide an hour of free programming to a student.  These students experience our programs all over the state and many are only able to interact with Hip Hop through the programs we provide.  Follow the link if you want to know more!

We're not around right now. But you can send us an email and we'll get back to you, asap. 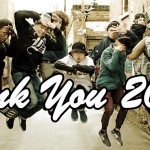